Posted by Brandy on January 28, 2008
If there's something scratching
in your bedroom wall
Who ya gonna call?
MOUSEBUSTERS
If there's something screeching
and it don't sound good
Who ya gonna call?
MOUSEBUSTERS
Yes- that's right, crafting has stopped because we have mice! We've heard them off and on since Thanksgiving, but it got progressively worse. Since it warmed up this weekend, Will inspected the foundation and found 2 holes. We stuffed the holes with steel wool and then sprayed an expandable insulation foam over it. Hopefully that will take care of the entry point.
Now to tackle the "in the walls" problem. We hear them in the bedroom and in the living room. Around 11pm you can track them as they run from one end of the living, across the ceiling, to the other end. In order to catch the little bastards we did what anyone would do - we cut a hole in the wall . . .
THE SCENE OF THE CRIME 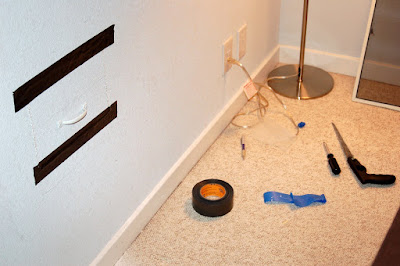 We were able to move some insulation around and set a few traps. We haven't caught anything yet, but we can still hear them. It's only a matter of time before they give in and go for the peanut butter. The whole experience was hilarious - as we pulled the drywall away (using the handy handle we installed) Will was terrified that a squirrel would come flying through the hole - so he grabbed the maglight and got ready to beat anything that came through the hole! I was holding a garbage bag ready to "catch" anything unexpected. As a final warning - Will reminded me that "Whatever is in there is more scared of us than we are of it". I haven't laughed so hard in a long time. I leave you with a parting shot of our bedroom wall - we used duct tape to make sure nothing escaped during the night. 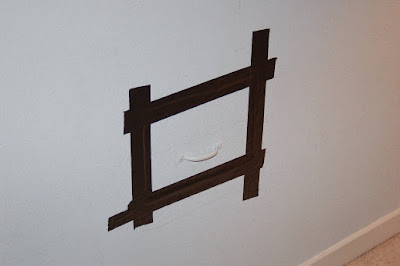 Michelle said…
Well? What is the latest update? I laughed out loud when I pictured Will ready to club any little critter than came out.
January 29, 2008 at 5:29 PM