While we are settling in well, there is still an incredible amount of work that goes into everyday life.  We are able to keep our sense of humor (most of the time) but I thought I'd share a few of our mishaps over the last weeks.

Last Monday, I just finished bathing the kids when A wanted to go down and tell Will something.  We have what we affectionately call "the stairs of death" and have asked all the kids to go down them backward, crawling as they go down the stairs.  A was doing this and his hand just slipped and he fell and hit his head right on the edge of the step then he started to roll.  Luckily Will was coming around the stairs and caught him.  We didn't know where to go so I called the ambulance number (similar to 911) and they sent paramedics.  They were super nice and spoke good English.  By that point we had gotten the bleeding to stop and after checking his vitals they said we could drive him ourselves to the hospital to get stitches.  Before they left they offered to give the kids a tour of the ambulance, then Will put the girls to bed and I headed to the ER with A. 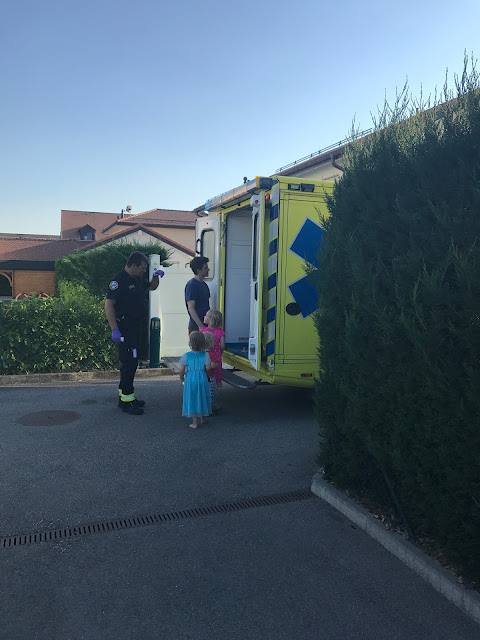 He ended up getting 2 stitches in the forehead but escaped a concussion.  He was a lucky little boy. 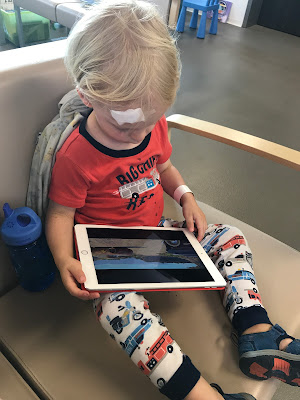 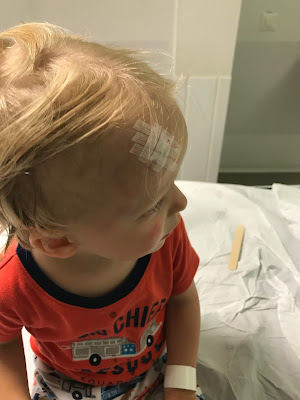 The hardest part has been keeping those Steri Strips on given how hot and sweaty its been!

The week prior, Will went to return one of the rental cars midday and had quite the adventure.  After dropping off the car he took a train from Geneva to Coppet, a town that is near to where we live.  He then grabbed what he thought was the right bus to take him back to our house.  He quickly realized that the bus started going in the wrong direction and he got off at the first stop he could.  He was still several km from our house and tried to call an Uber.  They declined his credit card so he started to run - down the highway - in his Birkenstocks!  P's bus comes at 16:10 so he was down to the wire.  He decided he had to hitchhike home if he was going to make it.  A kind stranger (who spoke no English) picked him at and he made it in time.


I had an important meeting at work and was ignoring his texts.  I didn't see these until it was too late! 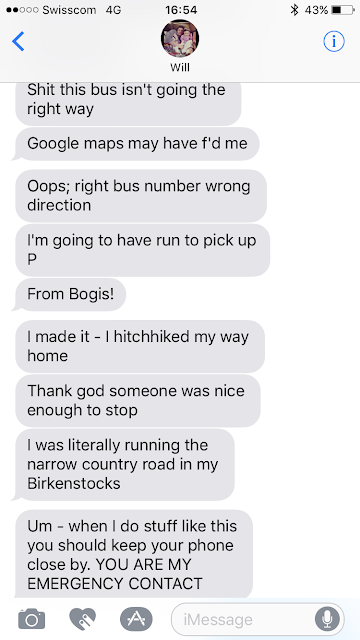 Nothing feels more isolating than literally having no support structure in a foreign country!  We developed a new system where if there is an emergency we call each other twice right away so we know to leave a meeting if needed.  We also talked with the other parents from the bus stop and if for some reason we don't show up - they have our back!